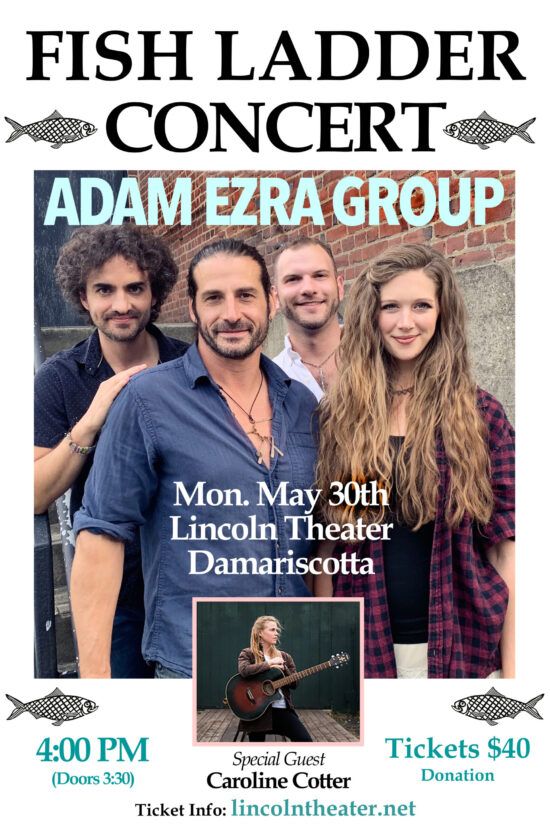 The Adam Ezra Group is coming to Lincoln Theater, presented by the Fish Ladder Restoration Project.

Working outside the confines of the traditional music industry, Adam Ezra and his bandmates – Corinna Smith (fiddle), Alex Martin (drums), Poche Ponce (bass) – built a community of fans through sheer grit and determination, regularly performing hundreds of shows a year for the past two decades without any major label or mainstream radio support. Fusing folk intimacy and rock energy with soul power and pop charm, the band first emerged from Boston in the early 2000s and quickly garnered widespread acclaim for their bold, insightful songwriting and interactive, euphoric performances. From hole in the wall bars and house concerts to sold-out headline shows and dates with the likes of Little Big Town, The Wallflowers, Gavin DeGraw, Train, and The Wailers, Ezra and his bandmates treated every single gig like their last, attracting a die-hard following that believed not just in the music, but in their commitment to activism and social change, as well. During the COVID-19 pandemic, Ezra created The Gathering Series online which to-date has reached a cumulative audience of 15 million viewers.  In addition, they brought The Gathering Series to the real world as they performed over 100 safe, socially distanced shows in parks and backyards around the USA. The band also embarked on an ambitious new recording series dubbed ‘The Album Project’ which will see the band releasing at least 19 new singles over the next few years. What comes next for the Adam Ezra Group? The future is anyone’s guess right now, and the only thing the Adam Ezra Group knows for sure, is they’ll be out there making music however and whenever they can.

Special Guest Caroline Cotter will be opening for Adam Ezra Group. With a captivating soprano voice and award winning songwriting, Caroline Cotter’s songs take listeners all over the world and into the depths of the human heart. Since her debut album, “Dreaming as I Do”, released and reached #5 on the Folk DJ Charts in 2015, Caroline has performed over 800 shows in 45 states and 13 countries. Currently touring to support her second major release, “Home on The River”, No Depression calls it “sweet and smooth, and downright refreshing… raising spirits with one song, calming them with another.” Icon Magazine writes, “Her well-constructed songs bring to mind the early work of Mary Chapin Carpenter.”  “Today’s folk scene has a new champion, one who encapsulates the sweetness, serenity and sophistication that has always made the genre so affecting in such a timeless manner. In that regard, ‘Home on the River’ is an absolutely essential record.” (Country Standard Time).