The Met Live in HD: Fedora (Giordano) with Pre-Opera Talk 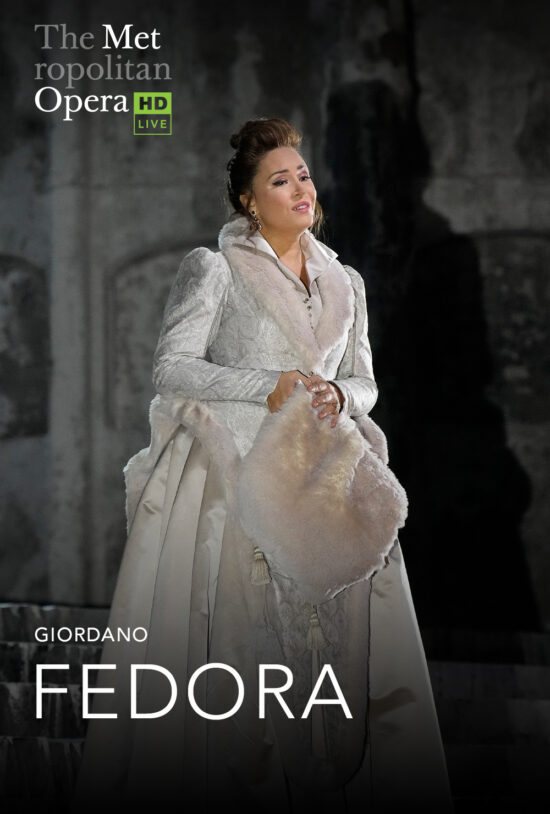 Umberto Giordano’s exhilarating drama returns to the Met repertory for the first time in 25 years. Packed with memorable melodies, showstopping arias, and explosive confrontations, Fedora requires a cast of thrilling voices to take flight, and the Met’s new production promises to deliver. Soprano Sonya Yoncheva, one of today’s most riveting artists, sings the title role of the 19th-century Russian princess who falls in love with her fiancé’s murderer, Count Loris, sung by star tenor Piotr Beczała. Soprano Rosa Feola is the Countess Olga, Fedora’s confidante, and baritone Artur Ruciński is the diplomat De Siriex, with much-loved Met maestro Marco Armiliato conducting. Director David McVicar delivers a detailed and dramatic staging based around an ingenious fixed set that, like a Russian nesting doll, unfolds to reveal the opera’s three distinctive settings—a palace in St. Petersburg, a fashionable Parisian salon, and a picturesque villa in the Swiss Alps.

Giordano (1867-1948), a younger contemporary of Puccini, wrote twelve operas in a style at times reminiscent of his more famous countryman.  Fedora (1898), which deals with love and deceit among wealthy Russians in Paris and elsewhere, and his better-known Andrea Chénier (1896) are the composer’s only two works to survive in the modern international repertory.  (Eventually, and here maybe appropriately, Giordano was honored by being elected to Florence’s Accademia Luigi Cherubini.)  Does Fedora, like Cherubini’s Medea, deserve more frequent production today?

Morton Achter, presenter:
This is the thirteenth season of The Met: Live in HD for which Morton Achter, a resident of Topsham and formerly of New Harbor, will present a series of pre-opera talks prior to selected broadcasts at the Lincoln Theater.  A retired college professor, Dr. Achter has taught about, produced, and directed opera and related stage genres for over sixty years.  Educated at the Eastman School of Music and M.I.T., and holding a Ph.D. in music and theater history from the University of Michigan, locally he has directed productions for the Lincoln County Community Theater, River Company, Round Top Center for the Arts, and Bath’s Chocolate Church Arts Center.  He serves on the Board of Directors of Midcoast Senior College in Brunswick, and has offered music-related courses for the organization since 2010.