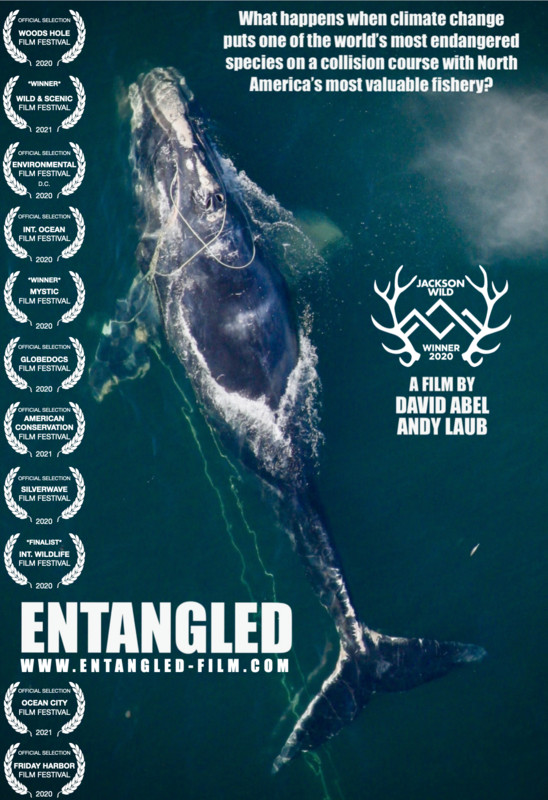 ENTANGLED, from director David Abel, is an award-winning feature film about how climate change has accelerated a collision between one of the world’s most endangered species, North America’s most valuable fishery, and a federal agency mandated to protect both. The film chronicles the efforts to protect North Atlantic right whales from extinction, the impacts of those efforts on the lobster industry, and how the National Oceanic and Atmospheric Administration has struggled to balance the vying interests. The film, by the makers of Lobster War and Sacred Cod, won a 2020 Jackson Wild award, known as the Oscars of nature films. It also won Best Feature Film at the Water Docs Film Festival, Best Conservation Film at the Mystic Film Festival, and the John de Graaf Environmental Filmmaking Award at the Wild & Scenic Film Festival.

We are pleased to welcome David Abel, who will join us virtually, for a post film talk back.

David is a Pulitzer Prize-winning reporter who covers fisheries and environmental issues for The Boston Globe. Abel’s work has also won an Edward R. Murrow Award, the Ernie Pyle Award from the Scripps Howard Foundation, and the Sigma Delta Chi Award for Feature Reporting. He co-directed and produced “Sacred Cod,” a film about the collapse of the iconic cod fishery in New England, which was broadcast by the Discovery Channel in the spring of 2017. He also directed and produced two films about the Boston Marathon bombings, which were broadcast to national and international audiences, on BBC World News, Discovery Life, and Pivot. His other films include “Lobster War” and “Gladesmen: The Last of the Sawgrass Cowboys.” “Lobster War,” which is being distributed by Gravitas Ventures, won the 2018 award for “Best New England Film” at the Mystic Film Festival and was runner-up for the Grand Prize for Best Feature Film at the 2018 International Maritime Film Festival. “Gladesmen” won the 2018 Made in Miami Award at the Miami Film Festival. Both of those films are also being distributed by Bullfrog Films. Abel, who began learning to make films as a Nieman fellow at Harvard University, is the film’s director, producer, writer, and director of photography.